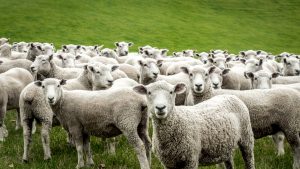 Alas, in the City of Liberty, as the shepherd watches over the sheep, Queen Corona reaches the city gates.

The shepherd promises them protection. But fearing occupation, he seals off the gates, hides the flock and scorches the land, so the queen would find nothing worth fighting for. But the queen’s agents, already in the city, begin stealing sheep.

A sheep pleads with the shepherd: ‘You promised to protect us and yet you scorch the land that we feed on!’

‘Do not be afraid,’ the shepherd replies, ‘I have prepared a place for you, underground, where you’ll be safe.’

‘But this is the City of Liberty,’ the sheep replies. ‘We were born to roam the land and graze.’

‘Not today. Not tomorrow.’

‘Who made you lord and master over us?’

‘But how can this be? For we are free by natural law [1], which existed long before the city. Can the city now take from us that which it did not give?’ Ignoring the sheep’s protestation, the shepherd guides the flock underground, and as the gates are shut and a lock placed upon it, the sheep turns to his fellows, lamenting, ‘Woe unto us, for Liberty is gone, and as it always is with mankind, his inordinate fear and his innate libido dominandi [2], the shepherd now intends to do more than just to protect.’

The sheep weeps, but his lamentation is drowned out by the bleating of many.

[2] Libido Dominandi (Desire to dominate) The City of God by Augustine of Hippo, published 426 AD

Any cookies that may not be particularly necessary for the website to function and is used specifically to collect user personal data via analytics, ads, other embedded contents are termed as non-necessary cookies. It is mandatory to procure user consent prior to running these cookies on your website.

This Site Is Protected By
Shield Security →